The complete line-up of Let's Rock Festival is out: One Fortress, two days, three stages, 20 performers!

This year's line-up consists of the currently most resounding names of the regional alternative scene. For some, the ambience of the Fortress of St. Michael's is already well known, and some are performing here for the first time and we have no doubt that all of them together will create the great atmosphere we are used to during Let's Rock.

Daily tickets at the price of 150 HRK are available at Eventim. 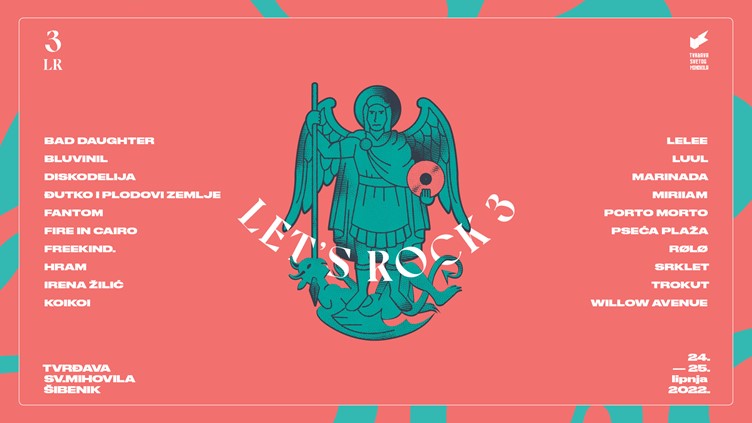 A new project by the local Croatian artist Dunja Ercegović, which will be presented to the Šibenik audience on the stage of the Fortress of St. Michael's. Also known to the public as Lovely Quinces, she will present her new award-winning album "Let Me Panic" at the Let's Rock Festival, which was crowned with two Rock & Off Awards and Porin for Best Female Vocal Performance in collaboration with Zagreb producer Leonard Klaić (She Loves Pablo, delapse).

One of the fastest growing domestic pop rock bands is once again climbing the stage of the Fortress of St. Michael's! Šibenik Apaches with a Zagreb address are coming to present their new single "U predgrađu" which will be on their upcoming second studio album, and on countless occasions we could hear it on leading radio stations. A bombastic performance awaits us this time as well!

Already a well-known name on the regional music scene, behind which hides Petar Wagner with his band, who with their analog hearts and digital fingers creates some new soundscapes. Their songs are mysterious adventures of passion and pain told in ciphers in the form of synthesizer sounds, dreamy melodies and usually-unusual lyrics. Indulge in the retro sound of a kind of machine for traveling through place and time, whose ultimate destination is unpredictable, just like the Phantom!

The alt rock quartet is coming to present the acclaimed second album, which shortly after its release earned the praise of the audience, while critics call them a first-class rock band. Mate, Filip, Jakov and Patrick, the Zagreb alt rock quartet that makes Fire In Cairo, presents a mix of indie, post garage, psychedelic, blues, progressive sound. The album hosted many talented artists, including Mary May and Dunja Ercegović (Lovely Quinces, Bad Daughter). Performance at the Fortress of St. Michael's will be an opportunity to see why the band is building live performances as one of its biggest assets.

Extremely talented duo consists of Sara Ester Gredelj from Croatia and Nina Korošak Serčić from Slovenia. They are musicians whose interesting combination has enriched the world music scene, and judging by their debut EP and new single "Visualize", they really enjoy neo soul, jazz and r’n’b. Their songs promote strong messages of love and hope, and the groove they achieve is so powerful that we have no doubt that the audience in front of the Fortress of St. Michael's will be knocked off their feet.

The word about the debut album of this Šibenik collective first spread through the streets, leaving the team breathless and full of enthusiasm. Their style is street old school, and they come directly from the core of the old Šibenik town. Their live performance leaves you breathless and the only thing we have to say is to fasten your seat belts because with the concert presentation of the album "Bijes" at the Fortress of St. Michael's, HRAM takes off.

One of our most respected and most awarded singer-songwriters is already well known to the Šibenik audience, but this summer she is performing at the Fortress of St. Michael's! This artist can proudly say that she shared the stage with the world-famous band Morcheeba, who covered her single “The Moon”. The music of this Zagreb singer-songwriter is filled with nostalgic textures colored by romance and dreams, successfully balancing between soft acoustic pop, indie folk and melancholic intensity of blues, and we are looking forward to her performance!

Behind the mystical name stands Ivan Lulić, who has been active on the scene since 2015. and is recognizable for his psychedelic pop sound. With the help of the accompanying trio consisting of Borna Jambrošić, David Lipovac and Bruno Čavara, these above-average tall guys will seduce you with their silky pop sound ideal for the bedroom.

The Zagreb singer-songwriter Miriiam is striking on the indie rock scene of strong female domestic vocals. The new album, which was released at the end of last year, was enriched by Miriiam with a recognizable dreamy indie retro pop sound, and this time the Šibenik audience will have the opportunity to listen to it live for the first time.

The famous Split band has already taken root on the stages of the Let’s Rock Festival, where they are performing for the third year in a row. It is a three-member vocal-instrumental ensemble that is already known to the audience through the bands Leut Magnetik, Wizard Of Stone Mountain and Tihi sadist. To the audience they present a new album "Ponte Rosso" which they say is a combination of colorful music where you can find something for everyone, and they also found time to design a visual for this year's edition of the festival!

This experimental ensemble is increasingly recognized by the contemporary electronic jazz sound that they have had the opportunity to present at numerous renowned domestic and foreign festivals. After the launch of a successful and generally accepted debut album that garnered praise from the profession and positive reactions from the audience, it will premiere in Šibenik, which makes us extremely happy!

This four-member post-punk / rock / noise band from Šibenik is coming to present new materials that they released after a full 5 years! The song "Novi svijet" from the last studio album "Sveluzija" which continued a series of critically acclaimed albums released for the publishing house Dancing Bear, attracted a lot of attention, and the video is signed by Šibenik director, musician and writer Ante Storić!

Tomislav Đudarić is a well-known figure on the alternative music scene - as the founder of the ethno-rock band Rusti and as a former guitarist of the band Svemirko. After taking the synthesizer in his hands for the first time, he came up with cheerful melodies of the pop genre and created his own versions of agro pop music! Recorded, mixed and produced in the Zagreb label studio more or less forever, the album "Slušaj mala" is also the first work that was released from that workshop on the Internet. Along with the members of Đutko's backing band called "Fruits of the Earth", the album also features numerous talented people such as Leo Beslać and Luka Šipetić (Nemanja), Mary May, as well as Đutko's former band colleagues from Svemirko!

KOIKOI is a fresh name from the lively and ever-evolving Belgrade music scene, which was first presented in 2019. with a song on the Hali Gali platform compilation. The band consists of a bunch of creatives from different backgrounds with the simple common goal of writing exceptional indie rock and alternative pop. KOIKOI’s musical expression exists at the intersection of regional alternative musical heritage and contemporary Western trends. Their debut album features the most exciting form of unorthodox pop so we have no doubt they will fit in perfectly within our festival line up.

Slovenian post-punk / indie-rock band Lelee quickly distinguished itself on the regional music scene thanks to its recognizable sound and vocals that are interestingly used in Macedonian and Serbian. In their songs, they refer to the pioneering unpolished sound of veterans such as Dinosaur Jr. and The Pixies. LeLee are champions of melodic indie songs with a special talent for the smooth delivery of striking choruses and nostalgic indie rock melodies that are definitely worth listening to live.

The band from Rijeka, which has been on the scene since 2003., is based on experimenting with different types of music genres, including pop, electronics and acapella. So far, they have released about 30 studio albums, mostly for the first Croatian independent label "Slušaj najglasnije!". They are coming to Šibenik to present their new album "Gubljenje vremena", which will be released soon, as well as numerous hits from the album "Marinada na vrućem krovu"!

Porto Morto is a growing name behind a seven-man band whose musical direction is based on a mixture of progressive pop, art rock and indie electronics. Fantastically accepted album "Portofon" from 2019., from which he won the first collaboration with Darko Rundek on the single "Hodaj", earned them three nominations for Porin, and the new album "PORTOPOP" defined a new sound, new stage identity, but also a new era of his career. The album was named one of the best regional albums in 2021., which was confirmed by Porin for the best alternative album, and on the occasion of the promotion in March, they filled the Zagreb Tvornica Kulture and made a concert to remember, so we welcome them with the same joy and impatience as on the first Let’s Rock!

Pseća Plaža is an audio-visual group from Zagreb founded in 2016., started by a group of like-minded people who want to create simple psychedelic music with overtones and elements of the world music scene from the late 60's. Their music is a blend of many musical influences, and it sounds like a landscape of urban jungle and a relaxed atmosphere of classical chansons copied in the form of a soundtrack. Drinking psychedelic melodies, dreamy and personally engaged poetry, and striking tropical rhythms make their songs as refreshing as a breeze on a hot summer night, and we have no doubt that they will refresh us on the stage of the Fortress of St. Michael's.

The young Sarajevo band Srklet has been on the scene since 2019., and is well known for its excellent live performances in Sarajevo clubs. They released their first album during the pandemic and conquered the whole region with it in a short time! The latest single "Invazija" represents the new sound and identity of the band - Fortress of St. Michael's can't wait for their live experimentation for the first time in Croatia!

Mary May, deservedly already known to our public, found her continuation of the story in the duo of Jakša Perković (Jack De Shaw) and Ante Perković, who proved to be the perfect choice for the continuation of her career. The band is new on the rich Croatian scene and it is the name from which we expect more great things, and the debut album "Come What May" testifies that they are on the right track. And when it comes to Mary May, then we are talking about one of the most important singer-songwriters on the domestic independent scene and that is why it is a privilege to listen to them in Šibenik in an environment that fits perfectly into their musical expression!

This summer, on the attractive stages of Fortress of st. Michael's, an abundance of great music, dance, socializing and entertainment awaits us.

This summer, on the attractive stages of Fortress of st. Michael's, an abundance of great music, dance, socializing and entertainment awaits us. 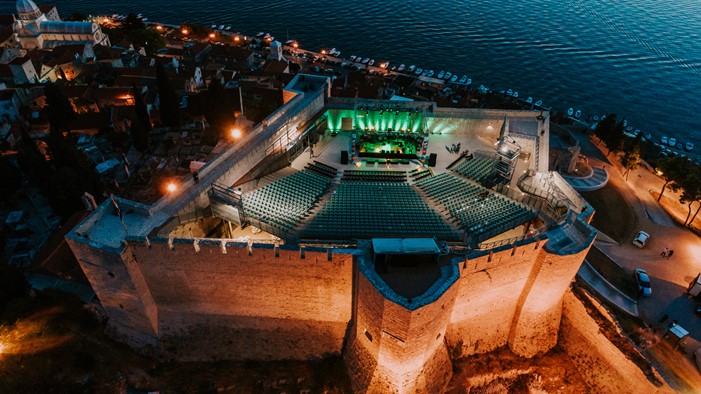